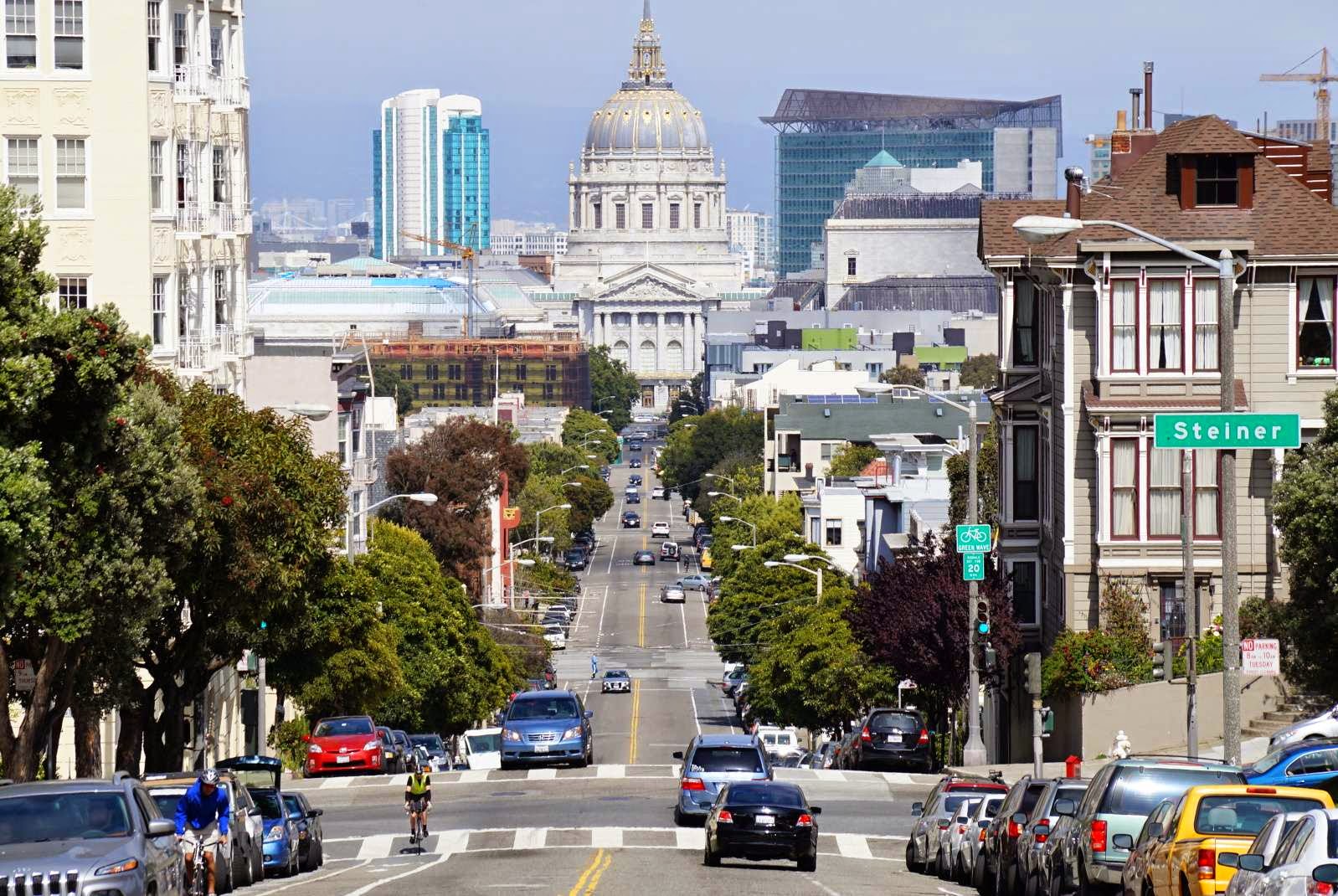 Our tour US – The West led us from May 14th to June 6th 2015 from Frankfurt with stopover London to San Francisco, Monterey, Los Angeles, San Diego, Las Vegas, Brice NP, Grand Canyon, Moab, Lake Dillon via Denver back to Frankfurt.

San Francisco! We have arrived!

Outbound flight to San Francisco with stopover in London

The flight to San Francisco from Stuttgart with a stopover in London: During the landing approach to Heathrow we were lucky to be able to do some loops over the city of London with a magnificent view of the city.
During the landing approach to San Francisco we could enjoy the vastness of Silicon Vallay.
After successful landing we took the BART from the airport to the Civic Center BART Station.
To buy a ticket for a one-way trip you have to pay at least the exact amount to the desired stop before you pay. You will then receive a so-called debit card, which will be collected at the destination stop. If the amount on the debit card is too small, you will not get out! If you use the BART more often, then you should charge a higher amount of money.
From the Civic Center BART Station we walked the 1000ft. to our hotel in 7th Street – BW Plus Panamericania.
Afterwards we did a little sightseeing from the City Hall to Powell Street.
Striking were the many homeless people near the City Hall.
On the second day a Cable Car Exclusive ride was on the program. With the bus 30/28 we went on to the Golden Gate Bridge. After a walk across the Golden Gate Bridge we took bus 28 to Daly City and then BART to Lost and then to the famous Lombart Street.
On the third day we took the Cable Car to Lombard Street. From there we walked up Telegraph Hill and on to Pier 39 to see the sea lions. We took the tram to the Twin Peaks. Back to Fisherman’s Wharf and dinner at Apple Bee’s.
The fourth day led us to the Transamerica Pyramid and the Columbus Tower. Further to Little Italy and China Town. and to the ferry port. Afterwards we visited the Painted Ladies. With the cable car we went to Fisherman’s Wharf for dinner.

Drive from San Francisco to Monterey

In the morning at around 6:30 a.m. we were picked up by a driver of the hotel with a Lincol limousine and chauffeured to the airport! There we picked up our rental car. Unfortunately it was not a Lincoln but only a Nissan.
We wanted to go for another round through San Francisco. But then we were stuck in a traffic jam at the Oakland Bridge because of the street festival.
With some delay we could continue our trip via Silicon Valley to Monterey.

Our drive from Monterey via Highway 1 to Redondo Beach (LA). 370 miles!! Or one tank of gas!

Today the journey continued from Los Angeles to San Diego with a little detour – well for 20 miles we needed about 2 hours – in Hollywood and the Griffith Observatory. From up there we had a great view over Los Angeles. Our drive to San Diego was rewarded with a beautiful old town. First conclusion: San Diego is absolutely worth a trip.

We are back in the internet world. The management of our hotel Treasure Island in Las Vegas wanted to charge $29 for WLAN per day, of course. So we practiced our internet skills and left early in the morning. We had to cover a distance of about 340 miles. The whole distance from San Diego to Las Vegas (LV) we were on a highway. Without construction sites and especially without traffic jams, which is rather rare for the highways around Los Angeles. In the early afternoon we arrived in Las Vegas. Our GPS led us right through Las Vegas Boulevard – a part of it internationally known as Strip. What a miracle our hotel was right in the middle of it. Our first impression was confirmed in the evening: Shrill, Crazy, just crazy Strip. Well! Once seen, that should be enough!

Hoover Dam – Origin of Las Vegas with its gambling houses!
There was the gas station:
We drove 380 miles and filled up with 9 gallons of gas at $3.99 / gallon in Las Vegas.
How many gallons of gasoline per 100 km did our Nissan need?
By the way, we also filled up for 2,79 $ / gallon.

The entrance fee is $20. By showing our “Beauty Anual Pass” we got a strong scolding from the cashier. It must have been written on the cashier that the pass is not accepted. Unfortunately the writing was so faded that we could not read it.
In Monument Valley we drove through the 2nd “17 mile drive”. Everything on gravel roads. The name comes from us, because the route is 17 miles long.

Drive from Monument Valley to Moab

Drive from Moab to Dillon/Colorado

Today we made a trip with Kay and Al to the nearer surroundings of their new home Silverthorne. Vail and Redcliff, where the Wild West still has a home, were among the destinations. It was simply terrific! We enjoyed the conclusion together with the children Anna, Hans with Diane in Dillon.

Today we went on a trip with Kay and Al to the Rocky Mountain National Park – terrific! Afterwards we visited Grand Lake – a city like in the “Wild West”. Shootouts were probably the order of the day here – well, 100 years ago. The end of our visit with Kay and Al was celebrated in Dillon at Pug Ryan’s. Many thanks to Kay and Al for the great days and impressions of Colorado and the Rocky Mountain we were allowed to take with us! Many Thanks!

Drive from Dillon/Silverthorne to Denver

Today we went from Dillon to Denver. Because of the really great landscape and the very very nice hospitality of Fam Grabenstein we leave the place with a lot of wistfulness. After a breakfast at the Arapahoe Cafe & Pub Down Under and a walk at Lake Dillon we started around 1:00 pm via Frisco – short shopping – on the I70 to Denver. After a stopover at Lookout Mountain we reached our hotel in the late afternoon. Then we went by bus to the Civic Center at 16th Street Mall.

Denver – Foray through the city

Denver surprisingly beautiful!
Wandering through the city. Visit of the Colorado State Capitol.
Take the bus 83/L ($2.25 each way) directly to the Civic Center.

Flight home with stopover in London

All in all it was a nice and eventful holiday.
We learned to appreciate the hospitality of the Americans once again.
Great meeting with the Grabenstein family: Kay and Al with children Anna and Hans and girlfriend Diane. The trips with Kay and Al to the Rocky Mountains as well as the graduations at Pug Ryan’s – the next beer was always the best!
Thanks also to the travel agency Discovery for the best recommendations of locations and bookings. Flights, rental cars and hotels/resorts – everything worked out great.

After driving over 3000 miles on the free/highways and refuelling 9 times – what about calculating how many litres our Nissan needs per 100km (9 gallons / 330 miles / 27 $) and how much the litre costs?

We will be back!!