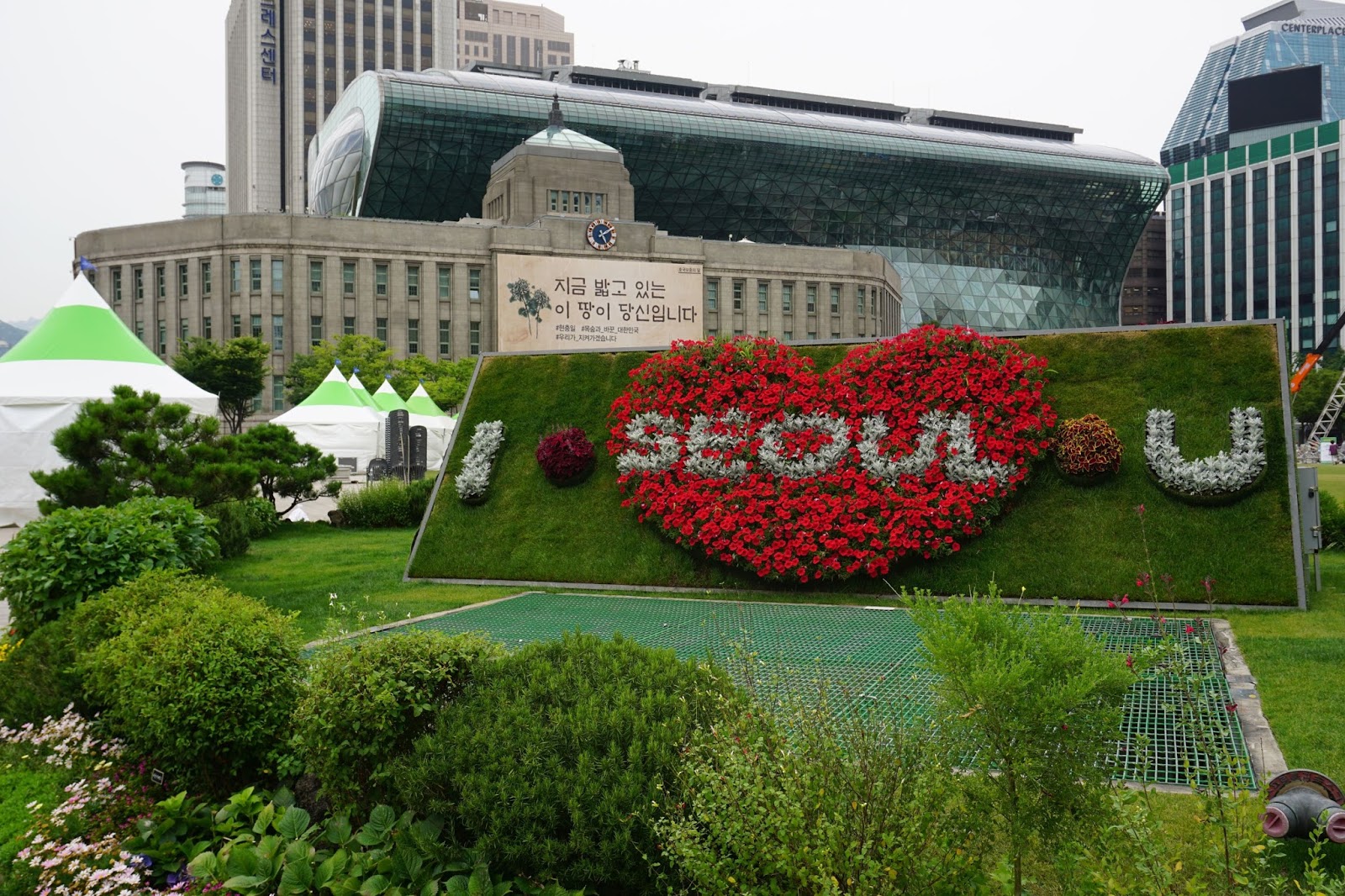 Flight from Tokyo to Seoul

Early in the morning – at 1:30 local time!! – we took the Airport Express Bus from Tokyo Bus Terminal to Narita Airport. The bus landed at Terminal 3 at about 2:45 a.m. Well International Airport? We have never seen such a sleepy airport in a metropolis before! Nothing going on really nothing!
We walked the 800m to Terminal 2. The way was deserted! In Terminal 2 we had to wait until 5 o’clock when a shuttle brought us to Terminal 1. At 7am we could finally check in, supported by a friendly lady from Asiana Airlines (Korean airline). Departure was then at 9 o’clock.

Finally – arrival in Seoul at 11:00 am. Already at 1am we took the Airport Express Bus 6011 to Seoul, more precisely to the stop at Changdeok Palace. Yes, you should remember the name otherwise you will end up somewhere!

On foot we went to the Hotel Ibis Ambassador. Two ladies confirmed the way on their iPhone. Well, Seoul has a very good WLAN coverage – and it doesn’t cost anything. Germany is a real WLAN desert!

A round of rest in the hotel was the order of the day.
Walk to the City Hall along the Cheonggyechon Stream.
Past the Hotel Lotte to the Hotel President.
Visit of the DMZ Travel Agency – Haha was the wrong agency – We did not have the documents with us – Crazy.
We went on to the tourist information.

At the end dinner at the Gwangcheo-Dong – Original Korean – Only Korean card – The communication took place with hands and an interpreter en/kr and vice versa at the neighbouring table.

Cappucino at Starbucks, that had to be.

Further it went back to the hotel.

The day began with breakfast in the Cafe Paris right next to the hotel. The breakfast was quite expensive for what was offered.

Then we went to the Seoul City Tours Travel Agency. At home we had booked online a DMZ tour for next Tuesday. The trip was paid for, but we hadn’t received a confirmation.
The address of the SCT was R507, #194-4 Insadong, Jongno-gu, Seoul, Korea – all right? But it was easy to find the SCT office. It was on the 5th floor in room 07 in quadrant 194-4 of Insadong (our hotel is also located in the Insadong district). We took the elevator to the 5th floor and a friendly lady confirmed our trip to the DMZ. Since this is a military zone, we were immediately briefed on the special features. Here are a few specials:
No T-shirt, only shirt with collar is allowed, only sturdy shoes. Camera with lens focal length of maximum 90mm. When photographing people, ask them beforehand, etc.

The city of Seoul has about 11 million inhabitants. The metropolitan region has a little more than 25 million inhabitants. This makes the region the second largest metropolitan region in the world after Tokyo.
Seoul is divided into 25 pol. districts. Gu stands for the district (with its own mayor) and dong stands for the quarter. Altogether there are 522 dong in Seoul.

Afterwards we bought the well-known T-Money Card and loaded it with 5000 won. The card is helpful when driving with the subway. Put the card on top of it at the entrance gate, the gate opens and you can go on. This makes driving on the subway a breeze.

With the subway we went to Gyeonybokgung Palace (Emperor’s Palace). This palace reminds a little bit of the Forbidden City in Beijing.

Afterwards we strolled through Bukchon with its nice little shops. When the rain came we took the subway to City Hall. There we had a special experience. We had never seen such a police presence before. Thousands of policemen and politicians. Well on the Seoul Placa there was a so called Freedom Festival and of course there were enough demonstrators who are against it. Some aggressive demonstrators were arrested by the police right in front of our eyes. A lot of press was also present. Phew that was exciting.

After we fought our way through the masses, we visited the Deoksugung Palace. Afterwards we looked around in the basement of the City Hall and then walked along the Cheonggyecheon Stream until we had Korean food in the Gwangcheo-Dong quarter. Tasted great!

Today we had our breakfast in the hotel – the Paris Cafe was too poor.
Afterwards we started a round trip on foot: Changdeok Palace – crowds without end!
Changgyeong Palace
Checking the departure of our bus 6011 next Wednesday to the airport
Visit Bukchon with its beautiful alleys
Continue to Sejong-dearo, the former parade route
Cafe was at Holly’s
We walked along the Changgyeong Stream to Gwangjank Market
We continued to the Pagoda Park
Through the Myo-dong quarter – has trains of a labyrinth – we walked to the hotel
Dinner was at the “New Yorker” in the Bukchon. Well, good, but expensive.
At the end we had a beer and a mojito.

Today we had breakfast in the hotel again.
From the hotel we went to the Anguk station, there was also a post office. From there the subway brought us to Myeong-dong. We continued on foot to the Cable Car Station, with the Cable Car we were weighed up the south mountain.

We went on to the Seoul Station (main station of Seoul). The new building is big and has a pleasant atmosphere – just worthy of a big city. From here the KEX trains start. They are comparable to our ICE trains, travelling at 300km/h to the cities of South Korea.
By the way, the station for the KEX trains is designed as a terminus!

– Demonstrations in Seoul are probably the order of the day –
In front of the station there was again a demonstration. Well, that’s why there was a huge police contingent present again. We philosophized with a New Zealander, for or against what is actually protested here.

In the middle of the demonstration – there was nothing else left to do – we went to the south gate and on to the Post-Tower.
In zigzag mode we went through the Namdaemun market – a typical Korean market – to the subway. With Subway 4 we headed for the Design Plaza in the Dongdaemun-dong district.

Dinner was again at the regular Korean in the Gwangsu-dong quarter. The menus were only in Korean. Well good that there are photos and the help of an interpreter at the next table.
By the way, beer is pronounced Meagyu.

Tomorrow we’re off to the DMZ!

Today we were in North Korea! This was one of the most impressive and at the same time most depressing moments of our Asia trip.
The Korean peninsula is divided into two independent states: In the north, communist North Korea and in the south, democratic South Korea. Between both countries is the Military Demarcation Line (MDL), which forms the border between the two countries. The Demilitarised Zone (DMZ) extends two kilometres to the north and two kilometres to the south. Detailed information can be found at Wikipeadia.

In Seoul several travel agencies offer trips to the Demilitarized Zone. We have decided to take the “DMZ TOUR 2 Korea JSA(Panmunjeom) Tour” on the Seoul City Tour for 77000 KRW per person. We already made the reservation at the end of February – it is quite easy and uncomplicated, like many things in South Korea! JSA stands for Joint Security Area The tour started at 10:04 am local time at the Hotel President – central starting point for many DMZ tours.
We started with two buses. One was for Chinese or better Chinese speaking people. The second one was occupied with Japanese speaking people and for all other nations who understand English. We had two tour guides, one of them explained in Japanese and the other in excellent English. The first one went to Imjingak Park. There we had lunch and visited the Freedom Bridge. Then we went on to the ID Check Point. There our passports were checked and we went on to the Visitor JSA Visitor Center of Camp Bonifas. In the fields there was a lot of barbed wire fence and security guards – like in former times at the border to the GDR.
Photography was not allowed on the whole trip from Imjingak Park to the JSA Visitor Center.

In the JSA Visitor Center we got a briefing in form of a slide show. Then we changed into special military buses. Photography was strictly prohibited there. For the continuation of the trip we were only allowed to take our mobile phone (only for taking pictures), wallet, camera with max. 90mm focal length and of course our passport. A paper on which it was documented that in case of a shooting by NK Sk we would not be liable.
Finally we arrived in Panmunjeom. There was a strict regiment. In two groups we were allowed to enter one of the blue barracks. In the middle – across the table – was the border between NK and SK. Yup, now we entered the first North Korean ground. We were only allowed to take pictures in the North Korean direction. We took our photos on north korean ground.
After leaving the blue barracks we had to line up in two rows – like in the military – and could take pictures of the barracks and the North Korean building across the street including the guard soldier. With the military bus we went on past the Axe Murderer Monument to the Brigde of no return back to the JSA Visitor Center.
There we changed into the coach and went back to Seoul to the Hotel President.
Well, there are still some skirmishes between NK and SK at the border. Bye Seoul: Great city, great people – on we go to Hong Kong!