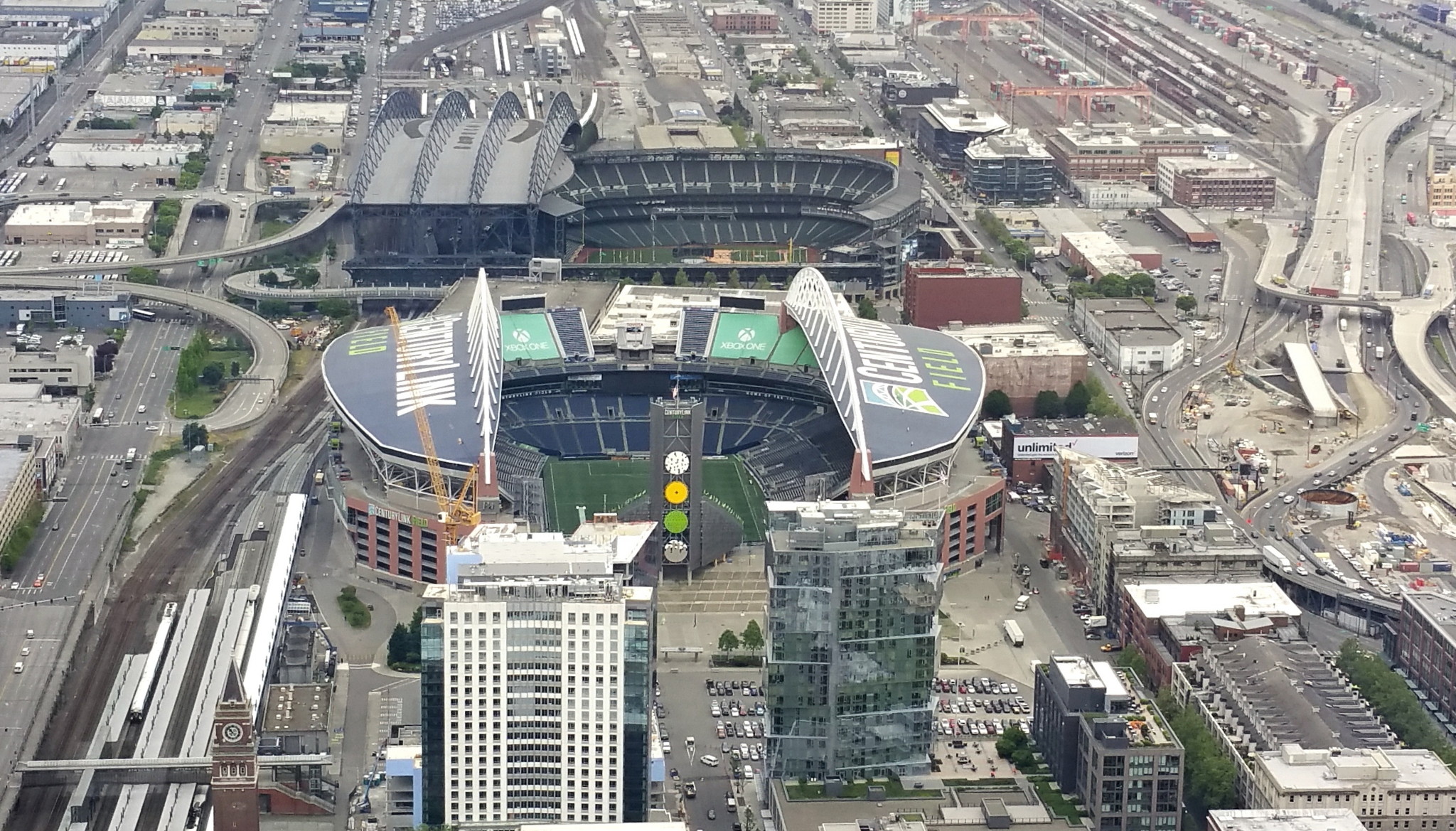 Flight to Seattle – We have arrived!

Flight over the “pond”

S-Bahn – Tamm Stuttgart – ICE Frankfurt mainline station
Flight LH 490 brought us with a 747/400 safely and punctually to Seattle International Airport
Rental car picked up at the Alamo. Upgraded from Mini to Intermediate. It was only a small price difference.
Trip to the hotel almost without Navi worked out well.
Later we made a little trip by car to Seattle and could see the most important sights from close range.

Today we drove to Mt. St. Helens. The volcano that exploded in 1980 and changed the landscape in a big area.
The drive there turned out to be a bit difficult, because we didn’t find the Jonston Observatory on our navigation system.
For American conditions small detours we reached the Jonston Observatory, what a view – Incredible!

One could look directly at the Mt. St. Helens and its crater (diameter 1 mile).
The volcano is still active. One could even see small steams (steam clouds) coming out. We probably would not have noticed it. A female guide, whose students probably got lost, pointed it out to us.
After the eruption in 1980 the volcano lost 1700Ft (approx. 500m) of altitude and we visited a film show of the eruption at the observatory. That was very impressive. At the end of the movie the screen was raised and a curtain was pulled away.

Wow!
Then we had a great view of Mt. St. Helens from the movie theater and visited Olympia, the capital of Washington State. Visit of the Capitol included.
The capitals of the states all look similar. The location of the WA-Capitol was however splendid. Situated above the city with a great view of the sea.at the end we went to the port. Dinner in a cafe/restaurant.

Conclusion of the day: 300 miles that were worth it!

Today the journey led us in or rather around the Olympic National Park.
From our hotel we drove via Olympia (The Capital of State Washington) to Aberdeen and on to Folks.
Interesting stopover at the Pacific coast Beach 4, where we found a lot of driftwood in the mouth of a river.
In Port Angeles we made a small round. From the observation tower we could see as far as Victoria (Vancouver Island) and of course the snow-covered mountain scenery of the Olypmic NP’s. We wanted to visit the Hurrican Ridge in the Olympia NP.
At the toll station there was an endless queue of vehicles.
Because it was already 15:30 o’clock, we decided to turn around and to drive fast further direction Sea Tec. There were still more than 120 miles to go. Via Bremerton and the “toll bridge” we drove to Tacoma, a classic industrial city without a real city center.
We quickly drove on to have dinner at Applebee’s (of course) at Tacoma. At 9:00 pm we went back to the hotel in Sea Tec. Sea Tac is a so-called Suburb of Seattle.
Today we covered a total distance of 450 miles (about 720 km)!

As a conclusion we took with us:
Varied and fabulous scenery. Wide and huge distances, which we Central Europeans like to underestimate!

Today a visit to Mt. Rainier National Park was on the agenda.
Mt. Rainier is with 14410Ft (approx. 4393m) the highest and at the same time the most impressive stratovolcano near Seattle. You can still see light steams (steam clouds) coming out. Whow – Incredible! we drove through the toll station Stevens Canyon into the Mt. Rainier pass road. After a few vehicles and a waiting time of about 10min we were able to enter. The toll cost 25$. If we would have taken the main entrance over Highway 704 we would have had to queue up to 2 miles! The drive past Mt. Rainier was very impressive. With our Toyato we drove to Mt. Rainier Visitor Center (approx. 6800F) It was Sunday and all of America was on the road in Mt. Rainier NP. At least we had the impression. The parking lot at the Visitor Center was hopelessly overcrowded. At walking pace we approached the last mile to the VC. We were lucky that just in front of us a vehicle pulled out and opened a parking space for us. At the end of the day we continued to Redondo Beach. We had dinner in a “budget strained” fish restaurant and covered the day with our Toyota Corolla only 214 miles.

Conclusion of the day: Impressive!

Our Toyota – by the way, it was an upgrade from Mini to Intermediate – had a radar on board. In combination with the Cruizer you could drive in the queue without having to accelerate and it braked automatically, sometimes a bit rough. When passing markings on the edge or in the middle of the road the Toyota warned us with a hellish beeping.

That was a first impression of autonomous driving. Well, almost, because you still have to steer.

Today we explored the surroundings of Seattle:

We returned the car in the evening at the Alamo at the airport. One day earlier than planned, as we will be leaving tomorrow with the link to Seattle.
In 5 days we covered a total of 1015 miles (1624km) with the beloved Toyoto.

Today we took the Light Rail Link from Angle Lake Station to Seattle to the International District/Chinatown Station.
The final stop Angle Lake is about 10min away from our hotel. There we bought a Daily Pass for 6$.
The ride to the International District/Chinatown Station took 35 min.
Arrived there we made ourselves first of all on the way to the King Street Station. Footpath approx. 5 min.
At the ticket counter we got the tickets for our Amtrak reservation Seattle-Vancouver. A nice man behind the ticket counter explained us at what time and where we should arrive tomorrow for the train ride with our luggage. We continued to the Columbia Center and via elevator stages – first to the 40th floor, then to the 73rd floor – up to the Sky View Observatory in the Columbia Center. Entrance fee for people over 55 years was 9$ (for comparison: Needle costs 29$/p).

Wow what a view! 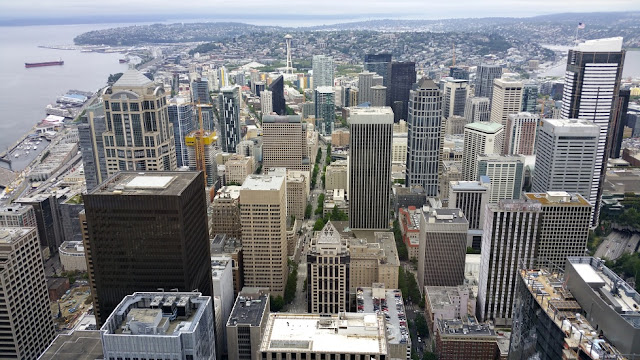 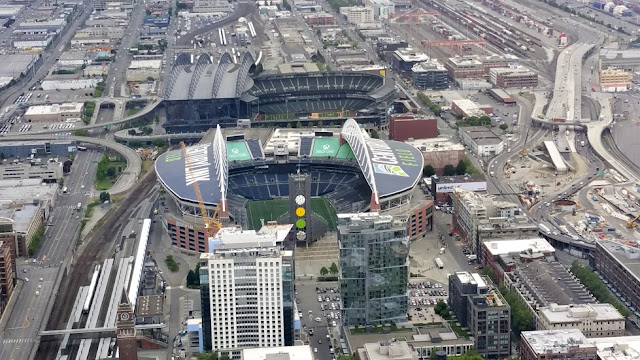 Continue by Amtrak to Vancouver, Canada.

Seattle: impressive location. In terms of cleanliness the city still has potential.
National Parks in the USA: very beautiful, worth a visit.